Did you know that if you’re a man living in the United States it’s almost inevitable that you’ll eventually have to face prostate problems? It’s important to learn about prostate health and ways to support it no matter your age.  September is Prostate Health Awareness Month and we want to point out how to support the health of this small multi-functional gland. Because the more you know about how the prostate functions, and how it impacts a man’s life over decades, the more you’ll be motivated to learn how to avoid embarrassing issues and other issues that you will be happier to live without. Continue reading to learn ways to help you avoid:

What is The Prostate Gland?

It’s a small gland the size of a ping-pong ball. It is located inside the groin, between the base of the penis and the rectum. It is vital to reproduction because it produces seminal fluid, which helps sperm swim and survive. Testosterone and its byproduct dihydrotestosterone (DHT) controls prostate growth during adolescence. It’s important to learn about the prostate and how to support its health. And as men get older, benign prostatic hypertrophy (BPH) or enlargement of the prostate gland commonly occurs from a build-up of the hormone dehydrostestosterone (DHT). This can result in a number of health complaints. These health complaints include difficulty urinating, the need to urinate frequently, a decline in sexual performance, and even the devastating embarrassment of incontinence.

After men reach 40, the prostate begins to grow because of the increase of DHT (dihydrotestosterone) in the body. The testicles and adrenal glands produce testosterone, and DHT accumulates in the prostate, causing prostate cells to rapidly divide. This results in a condition called BPH, benign prostatic hyperplasia. This is an overgrowth of prostate tissue that pushes against the urethra and the bladder and blocks the flow of urine.

It’s often described as squeezing the pipe shut, like stepping on a garden hose and blocking the flow of water. The pressure can make it difficult to urinate and results in a variety of symptoms. Also, the bladder wall becomes thicker and irritable. The bladder begins to contract even when it contains small amounts of urine, causing more frequent urination. Eventually, the bladder weakens and loses the ability to empty itself. Urine remains in the bladder and can cause problems associated with BPI such as the feeling of urgency, increased frequency of urination, and having to get up multiple times during the night.

What Helps Promote a Healthy Prostate?

Studies have shown that vitamins, minerals and other antioxidants can help.1

Beta-sitosterol is a plant sterol that supports healthy urinary flow. It can be taken as a dietary supplement and is naturally found in a variety of foods. These foods include: avocados, pumpkin seeds, wheat germ, soybeans, peanuts, pecans, olive oil, flaxseed, and tuna. Beta-sitosterol improves urinary symptoms and flow measures.

In one randomized, double-blind, placebo-controlled and multi-center study, 200 men with benign prostate enlargement, who took a daily dose of 180mg of Beta-sitosterol showed a ~35% increase in urine flow, and a ~55% reduction of urine remaining in the bladder.2 In another study, 177 patients received 130mg of Beta-sitosterol a day, and experienced a similar improvement.3 And in a third study, 519 men also experienced relief.4 Each of these studies provides a strong incentive for the daily use of Beta-sitosterol, either alone or in combination with other phytosterols and triterpenoids.

Zinc is a trace mineral required by more than 200 enzymes, and is essential for male sexual potency, proper wound healing, immunity, and many other bodily functions. Since the prostate gland requires 10 times more zinc than any other gland or organ in the body, researchers have surmised that a zinc deficiency might be a contributor to an enlarged prostate gland. In fact, one study showed that prostate conditions, including BPH, showed a significant difference in concentration of zinc in blood, urine and tissue when compared with healthy individuals.5,6

Foods high in zinc include: pumpkin seeds, sesame seeds, almonds, adzuki beans. Selenium is an essential trace mineral which is apart of many biological processes, including enzyme regulation and immune function. The studies showing that selenium helps support prostate health are not conclusive. However, there is enough evidence showing that selenium supplementation is beneficial.7,8 Selenium is a trace element which you can get in rice and wheat, seafood, tuna, meat, sunflower seeds, and Brazil nuts.

Lycopene is the most abundant carotenoid present in the prostate. In one study, 32 patients ate a daily serving of tomato sauce starting three weeks before prostate surgery and the researchers were amazed by the results. The patients’ blood lycopene doubled and the prostate lycopene concentration tripled during this short period. There was also a decrease in blood prostate-specific antigen (PSA).9  Lycopene is abundant in tomatoes, and you obtain the most efficacious amount when cooking the tomatoes in olive oil. 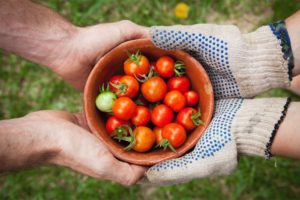