You’ve heard of Omega 3 supporting your heart- but do you know about omega 3 brain health support?  Brain Awareness Week is March 15 – 22. Years ago, no one even talked about brain health besides whispering about grandma’s or grandpa’s senility. Senility used to be called “hardening of the arteries.” Today it’s called arteriosclerosis or cognitive impairment. Arteriosclerosis occurs when the blood vessels that carry oxygen and nutrients from your heart to the rest of your body – including the brain – become thick and stiff. It’s the result of the build-up of fat, cholesterol, and other substances in the walls of arteries. These deposits are called plaques. Over time, these plaques can narrow or completely block the arteries. But there’s something we can do about it.

Essential Fatty Acids – the healthy fats you can’t live without

Essential fatty acids (EFAs) are critical to every cell in your body and essential for anti-aging. In fact, your body needs EFAs just like it needs other essential vitamins and minerals to help prevent disease and support health. Since the body cannot manufacture them, EFAs must come from the food you eat and/or nutritional supplements.

Omega-3 polyunsaturated fatty acids are extremely important in brain function. Approximately 20% of the dry weight of the brain is made up of omega-3 and omega-6 fats. Docosahexaenoic acid (DHA) is particularly prevalent in the brain and can be converted to Eicosapentaenoic acid (EPA).1 A deficiency of these fats can contribute to disorders of the brain including depression.

Current thinking is that omega-3 fats and omega-6 fats need to be balanced in the diet at a ratio of 1-to-1 or 2-to-1, rather than the normal 20-to-1 ratio seen in most Western diets. The best way to do that is to supplement your diet with an excellent fish oil nutritional supplement, and/or eat fish several times a week. 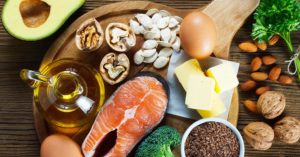 Fish is an excellent source of omega-3 fatty acids. If you don’t want to eat fish every day, which would be difficult for most people, take a fish oil supplement, flax oil supplement, or include freshly ground flaxseed in your diet. (see below.) Tuna contains omega-3 fatty acids, but it’s probably best to limit yourself to one can per week. Although the FDA has not put tuna on the list of unsafe fish for pregnant women, tuna has been reported to contain high mercury levels. The general advice for pregnant women to limit canned tuna in their diet to no more than seven ounces per week.

The American Heart Association recommends eating fatty fish at least twice a week. But Dr. Barry Sears, author of several books including The Zone and The Omega Rx Zone: The Miracle of the new high-dose fish oil (HarperCollins Publishers), recommends getting a maintenance level of 2500 mg EPA and DHA every day. A 3-ounce can of sardines has 1500mg of EPA+DHA and a serving of salmon is similar, although a large serving of salmon probably has 2500-3000mg. So every day, you would either need to eat two cans of sardines or a large portion of salmon. Of course, Japanese fishermen eat that much fish and Eskimos eat much more. It is possible to get 2500 mg of EPA and DHA with fish, without taking fish oil capsules. But if you do, you would be eating almost no other protein source besides fish. An easier way is to take a high-quality omega-3 nutritional supplement.

A study published in the January 22, 2014 online issue of Neurology2 found that the participants who took fish oil supplements for eight years had larger brain volumes. This is significant because shrinking brain volume is a sign of Alzheimer’s disease, as well as normal aging. The women, who averaged 78 years old, had MRIs of their brain, and blood tests to determine the omega-3 fatty acids levels in their red blood cells. When compared to the women who had the lowest levels, those with the highest levels of omega-3s had a 2.7% larger volume in the hippocampus (the region of the brain that plays an important role in memory). They also had a 0.7% larger overall brain volume.

A recent scientific paper3 found that omega-3s, and particularly DHA, are important for brain and eye development. DHA plays a significant role in mental health throughout early childhood and into adulthood. Human breast milk contains omega-3s and the concentration depends on the dietary omega-3 intake. This may be why breast-fed babies, as compared to babies on formula lacking omega-3s, have a lower incidence of learning disabilities later in life. Interestingly, the researchers also found that children with autistic spectrum disorder have low DHA and total omega-3 fatty acids in their blood.

If you don’t eat fish, don’t worry. Flax oil has similar benefits. If you’re a vegetarian use flaxseed oil. It’s delicious on salad. Flaxseed oil provides benefits similar to fish oil. Flaxseeds are the richest natural source of omega-3 fatty acids. Studies have shown that the oil offers the same protective effects against cardiovascular disease as fish oil, and that it is also effective in reducing platelet aggregation (blood clotting which can lead to heart attack or stroke).4

Eating fresh fish every day used to be the best way to get high-quality fish oil. But not only is that difficult for most of us living in the U.S., much of the fish now found in the oceans, lakes, and streams contain dangerously high levels of mercury and other toxins. The health risks of ingesting these toxins outweighs the benefits of getting omega-3s … since we’d have to eat lots more fish than may be considered safe.

Supplementing your diet with fish oil capsules is the next best thing to relying on fresh fish. Just be sure that you take a high-quality, fresh product. Check the expiration date on the bottle, and cut open a capsule and taste the oil. If it tastes and smells like fish that is not good, don’t eat it! It is rancid oil. Even the best oil will be slightly fishy and oily but will not have that sharp, bitter, fishy smell of rancid fish oil.