6 Tips on How to Keep Your Brain Sharp

You bring your car in for regular oil changes, go to the dentist for check-ups, and consult with your accountant at tax time. It’s important to know how to keep your brain sharp. But how often do you take the time to think about your brain health? As we age, we become more at risk for developing cognitive issues. November is National Alzheimer’s Awareness Month. It’s important to understand that Alzheimer’s and dementia are not a normal part of aging. Yet, there are more than 6.2 million Americans living with the disease. Maybe Alzheimer’s has had a person impact on you or know someone who is struggling with it.

Researchers around the globe continue to work on finding a cure for this dreaded disease. We still don’t know where it stems from, but we do know that “what’s good for the heart is good for the brain”. It’s the perfect time to think about ways you can boost your brain power — and heart health in order to make sure the two most important organs in the body are working as well as the muscles that help you run, the joints that allow you to move, and the teeth that enable you to chew your food. So do what you can now to maintain your brain health later. There’s nothing more important than feeding your head with good food, proven nutrients, and rest & exercise.

Maintaining good sleep quality promotes better cognitive functioning and protects against age-related cognitive declines. Sleep serves many functions which range from tissue restoration to actively promoting memory stabilization and integration. Researchers have shown that acute sleep deprivation and chronic sleep restriction can also lead to increases in blood pressure, cortisol levels, insulin, and inflammation, which can accelerate cognitive aging.1,2,3,4 So work on your sleep hygiene, if you’re not getting the zzzzzs you need to function at your best. Unplug at least an hour before bed, soak in a tub filled with Epsom salts, play soothing music, make sure the room is not too warm, etc. And, never go to bed mad.

Did you know that your brain is 70% water and can experience dehydration just like your body? When it’s dehydrated, neurotransmission—which is heavily dependent on water—is impaired, resulting in poor memory, concentration and impaired abstract thinking. In fact, recent imaging data suggest that the brain of children and elderly adults may have fewer resources to manage the effects of dehydration. Consequently, cognitive tasks may be more demanding for younger and older brains and performance is more likely to be impaired in these populations, in comparison to young healthy subjects who have greater and more efficient resources.5 Drinking healthy fluids is as important as eating healthy foods. Water is the top choice, followed by milk (any type), vegetable and fruit juices. Remember that juices contain a lot of sugar, both natural and added, so don’t overdo them. Soups are nourishing and hydrating but be aware of the sodium content. Avoid carbonated and caffeinated drinks which have a diuretic effect. And especially eliminate soft drinks; they increase your risk of insulin resistance and diabetes.

Chronic stress can result in a buildup of cortisol in the brain, which can impair the brain’s ability to function fully. It can disrupt synapse regulation and even reduce the size of the brain, which impacts memory and learning.6 Find ways to chill out so you don’t get into a chronic “fight or flight” situation in which the adrenal glands that sit on top on your kidneys don’t continuously pump out cortisol. Get a dog, use aromatherapy oils such as lavender for calming, meditate, do yoga, dance as though no one is watching. Do anything that will help you unwind and stay centered, without relying on alcohol or recreational drugs.

4. Enjoy a diet filled with foods that support brain health. 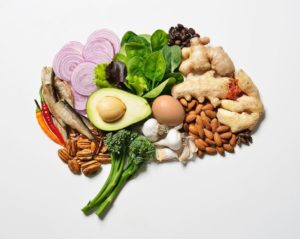 The Mediterranean diet emphasizes eating a plant-based diet with plenty of fruits and vegetables, whole grains, legumes and nuts. It uses healthy fats such as olive oil and avocado oil. It also limits red meat to no more than a few times a month. In addition, it favors eating salmon, halibut, sardines, and tuna at least twice a week. A 1995 Italian study researched the effects of nutrient-derived antioxidants on low-density lipoprotein (LDL) oxidation. The study found that olive oil constituents effectively inhibit (LDL) oxidation, suggesting that the intake of such antioxidants plays a role in the lower incidence of coronary heart disease in the Mediterranean countries, where olive oil and other high-antioxidant foods are a major part of the diet.7 A more recent study found that olive oil consumption helps delay cognitive decline in older adults.8

Nutritional supplements can boost brain function. A 2019 systematic review of the effect of omega-3 fatty acids on cognitive decline concluded that omega-3 supplementation might have a positive effect on cognitive function. Ten out of the 14 studies showed that omega-3s had a positive effect on at least one of these cognitive functions: working memory, executive function, verbal memory, short-term memory, and perceptual speed.9 Resveratrol is a super antioxidant found in red grapes and wine. It has also been shown to reduce the inflammation and damage in the blood vessels that results from homocysteine.10

Hundreds of studies have shown that it supports cardiovascular health and may even provide anti-aging benefits. Researchers are now finding that resveratrol can also offer protection against cognitive decline by inhibiting inflammation, reducing free radicals, supporting blood flow to the brain, and regulating certain enzymes.11 It’s been said that our gut is our second brain, so it makes sense that probiotic supplementation helps improve cognitive impairment. A recent study examining the beneficial role of probiotics in the brain function of healthy, older adults found taking a probiotic for 12 weeks helped promote mental flexibility and alleviate stress.12

You’ve heard a million times about the importance of exercise. But did you know that it helps keep your brain in good shape, too? A meta-analysis of 39 studies found that physical exercise improved cognitive function in adults over 50s. This was regardless of the cognitive status of participants. It’s vital to keep your body moving for overall health. This is whether it’s a 30-minute walk three times a week, an epic mountain climb, or a swim in the ocean. For safety, check with your health care provider before starting a new exercise program.

Stay sharp! Incorporate a brain boosting regimen into your life. You’ll stave off brain fog, keep your heart in shape, and be the first one to say “I got it,” the next time you play “Name that tune.”